Mr. Ohno, who studied in Indonesia, talked about how he became interested in overseas study and took steps to apply for the "Tobitate (Leap for tomorrow)! Program," starting first with participating in short-term study abroad tours to gain overseas experiences. He added that his studying abroad experience has given him strength and significantly impacted how he handles his work in his current workplace.

Mr. Miyake, who studied in Costa Rica, started to tell students his story about how he accomplished his vague idea of studying abroad for real. Then he continued regarding how he improved his Spanish to the level of giving a presentation in Spanish after struggling with the language barrier and how he succeeded in returning to Costa Rica for his research by finding a TAU Scholarship and winning it. Mr. Miyake stated that his study abroad experiences developed a strong sense of initiative: every time he makes a decision, he does not hesitate to act on it. This has formed the foundation for his success both in and outside of his job.

At the seminar, participating students were actively involved, asking questions about preparing applications and interviews. We believe that this seminar encouraged students to potentially pursue the same challenge in the future.

The seminar has been recorded and is available for students who could not participate live. 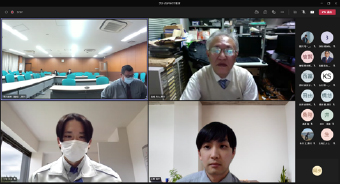 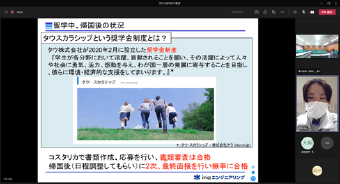 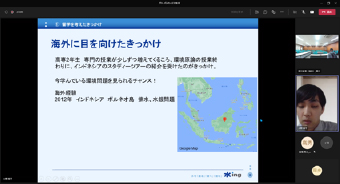